In 2011 PricewaterhouseCoopers estimated the Brazil sports market would grow by 5.3% pa through to the end of 2015, to value of US$4.2 billion. The local sports sponsorship industry is reckoned to be worth US$1 billion, with football accounting for 62% (source: IMR, UK).

There is a continuing build in television sports content and the World Cup and the Olympic Games has given a spur to sponsorship interest. Football clubs are the big initial beneficiaries, after all football is the main sport, by far. Globo, giant media conglomerate, spent US$715 million in 2012 on media rights with clubs. This may reach $1 billion in 3-4 years. Football coverage on TV accounts for almost 70% of all sports coverage.

IMR noted last October that two of the country’s leading football clubs, Corinthians and Flamengo, are currently without primary sponsors. Both are holding out for major deals, but no club has matched Corinthians’ US$23 million deal, signed two years ago, with pharmaceutical group Hypermarcas. While Itau Bank is principal sponsor for the World Cup (along with food producer Seara, Inbev/Brahma beer – the number two Brazilian beer by market share – and others), Caixa Economica Federal (government-owned) has signed a US$14.9 million one year shirt sponsorship deal with leading Sao Paulo club Corinthians. Corinthians also have an ongoing agreement with Nike for players’ kit, recently extended to 2022, valued at about US$144 million. 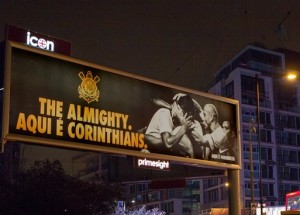 Corinthians have 35 million fans and is Brazil's wealthiest soccer club, worth about US$500 million. All the more remarkable given that five years ago the club was in parlous state and relegated to the Brazilian League's second division. Among other initiatives, the Club has opened 110 shops selling merchandise. New found cash from fans is helping fund its new stadium (see photo below). Corinthians played Chelsea in London in December and the club with Nike created a massive outdoor billboard advertisement in West London, the home of Chelsea FC, designed to provide international exposure for Corinthians, as well as illustrating the potential global appeal of the club. The billboard featured and image of players with the words "THE ALMIGHTY: AQUI È CORINTHIANS" (Corinthians Are Here). Corinthians has the biggest fan base of any club in Japan. When the team later played Chelsea in Yokohama, Japan, also in December, some 30,000 Brazilians came. Incidentally, Chelsea won the first game, Corinthians the second – for the FIFA 2012 Club World Cup.

Rio based Flamengo has negotiated a main shirt sponsor by agreeing a three-year deal with Peugeot – after a long search through 2012. This follows Flamengo agreeing a new 10-year kit partnership with Adidas worth a reported US$183 million. Flamengo is the most popular team in Brazil, with over 36 million followers as of 2010.   Flamengo finished 11th in the 2012 Campeonato Brasileiro Serie A season. Banco BMG, Mobil Super and TIM are the club’s top-tier sponsors.

Sao Paulo Série A giant has agreed a new kit partnership with Penalty worth over US$17.1 million  per year until 2015 and signed a main shirt sponsorship with Semp Toshiba to end of 2014, US$11.3 million.

Overall, the Brazil football shirt sponsorship was valued at Euro105 million in 2010, third in size after England and Germany.

As well as Nike, Adidas, Puma and others moved into Brazil over recent years. In doing so they and other large brands raised the price of sponsorships. Note that for the 2016 Olympic and Paralympic Games, Bradesco Bank and telco Embratel/Claro have each paid about US$300 million for their rights as main sponsors. There won’t be many more like those. An example of the pricing effect is that local sports gear maker Penalty found it necessary to go abroad, mainly elsewhere in South America, to secure sponsorship value. Locally, Penalty is shirt provider for Vitória, one of north-east Brazil’s main clubs.

The Olympics and international exposure across various sports is producing greater interest in support for local sports other than football. Prior to and now following the London Games, a good number of UK, European and US specialist marketing, media and advertising agencies have started their moves into Brazil and their focus will stimulate new impetus in the market. They variously offer services that include media relations, crisis management, spokesperson training, event management, stakeholder engagement, digital and social media, social responsibility and internal communications, among others.

There are new opportunities in leveraging events associated with the forthcoming World Cup, Olympic Games and sports tournaments that are being attracted to Brazil, such as in tennis, car racing, X-Games, basketball, golf, volleyball, cycling and rugby. This will see far more focus on sports achievers/celebrities. VW has shown the way with some excellent football celebrity marketing, promoting the best-selling car in Brazil, the VW Gol (‘Goal’ in Portuguese).

Further, Brazil is spending massively on new sports infrastructure and venues…and all these will drive sponsorship deals. Needed to fill out the pillars of revenue that the venues will require in order to achieve viability. There will be negotiations for home teams, naming rights, food and beverage rights, game-time advertising/media management, venues services and technology, fan engagement, access for wider use of venues (will football, for example, be enough to keep the wolves from the doors?) One irony in Brazil is the relatively poor attendance at football matches, despite the game’s popularity – a reflection of low incomes and a testament to the strength of television. This is seen by some who seek to promote new sports as presenting a real opportunity.

Additionally, the country will host a number of large cultural / historical events in the next few years. Even Carnival attracts sponsors. This year, 8 of 10 samba schools on parade at Carnival in Rio had secured company sponsorships.

“At present there is widespread acknowledgement that the commercial know how among rights holders still leaves a lot to be desired. This is bound to change as they go on a steep learning curve,” says Simon Rines, author of the IMR report referred to above. So, together with the growth in major events and sports sponsorship comes content packaging, events management, properties management and rights management, and each of these has a long way to go in Brazil.