News Sochi – a fabulous dream at a price

Sochi – a fabulous dream at a price

One year out from the Sochi 2014 Winter Olympic Games…amid celebrations and lavish promotions, Sochi will be ready – Putin has promised! President Vladimir Putin spoke English in public, a very rare occurrence, in presenting the Sochi bid. 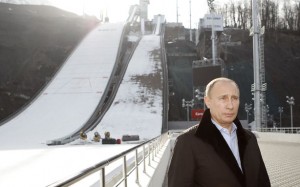 This is the new resort in which Stalin built his dacha, in the Soviet era. He 'encouraged' its development as a summer beach resort. And about 85 percent of Putin's dream needed to be built from scratch.

The cost of these games has risen to US$51 billion, five times more than expected and three times the cost of the London 2012 Olympics. Russia’s oligarchs have invested substantially, including a new US$2 billion ski resort, a new port, high speed rail and major roads.  Gazprom, the state-owned corporation Putin runs like a CEO, has built many of the ski venues. It is said that one can see Gazprom's logo everywhere in the Olympic space in Sochi. Billboards for Putin's other "pillar," the state-owned oil giant Rosneft, are widely seen and there is a luxurious mountain resort built by Interros, the holding company owned by Vladimir Potanin. Putin seems friends with all the oligarchs.

The construction program is enormous, with 400 projects working four shifts.  The project consists of two main parks: A compact sea-level park, housing the skating venues and a 40,000-seat Olympic stadium; and a sprawling mountain park, which is hosting snowboarding, bobsledding, the luge and skiing on trails as high as 2,050 metres (6,725 feet) above sea level. 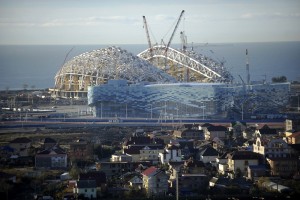 The two parks are to be connected by a 30-mile highway, as well as a high-speed train that will run every five minutes and transport more than 86,000 passengers a day. Once they reach the mountain’s base via train, passengers will take one of 17 gondolas up to a ski resort and Olympic competition venues.   There will be apartments for 2600 athletes.

IOC President Jacques Rogge, who finishes as President in September 2013, commented that "You have to put it into proportion," Rogge said. "The organisation of the Games is not going to cost a lot of money. But the government … wished to develop the whole area.    …. the train and the tunnels and the road … they are meant for generations to last."

This year the weather has been warm, too warm. And following the planning that was instigated for Vancouver, Sochi is already starting to stockpile vast amounts of snow for next winter.  They expect to have 250,000 cubic meters saved up by the games—an emergency backup supply in case the 430 snow machines that are being installed don’t suffice.

This video provides a good overview of the construction program, an interview with an official spokesman http://video.msnbc.msn.com/nbc-news/50729669#50729669

On the other side of the coin, Russian Olympic Committee vice-president Akhmed Bilalov is being dismissed from his position after President Putin criticised delays in delivering the ski jump facility for Sochi’s 2014 Winter Games. Bilalov was part of the committee that won the bid for Sochi. 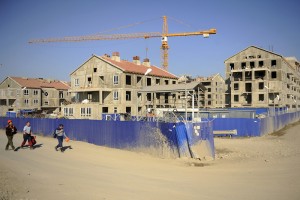 Bilalov led the Krasnaya Polyana company that was responsible for the ski jump complex before May 2012, when state bank Sberbank bought a controlling share in the firm. Delays stemmed from the discovery during construction that the soil at the site was different to that initially envisioned. The ski jump facility is now expected to be completed in July.

Footnote 1: In January, 75 year old Aslan Usoyan – aka Ded Khasan – one of the highest-ranking figures in the Soviet-era and post-Soviet underworld, was assassinated by a sniper. He had become the equivalent of a mafia godfather in Moscow and was a powerful force in Sochi. It seems the Sochi Winter Olympics are proving to be an extraordinarily rich honey pot for corrupt officials and organised crime.

Footnote 2 : The Formula One grand prix will be held in Sochi in 2014.