IOC commission visits Rio de Janeiro – get the ‘revs’ up

Nawal El Moutawakel, chair of the International Olympic Committee's (IOC) Coordination Commission, diplomatically led her team of inspectors on its its fourth visit to Rio de Janeiro since the city’s selection in 2009 as host for the 2016 Olympic and Paralympic Games. The IOC team issued a number of “gentle reminders” about “time slipping away”. There are concerns about delays and slow progress. 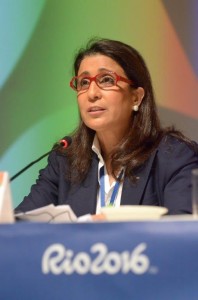 El Moutawakel praised organisers for the amount of work carried out since the last visit in June 2012, such as on the media villages, the venue masterplan, and the recruitment of staff by the Organising Committee, including a new chief executive, Sidney Levy. This was the first ‘CoCom’ visit with Sidney Levy as CEO. It is reported that there is still no official budget for the Games.

The two Olympic Parks – in Deodoro and Barra – and many supporting infrastructures need much work to be delivered. There is still uncertainty over the venues for rugby, field hockey and golf. Diving may yet be moved.   Rio announced last year the rugby venue will not be built in the originally planned venue, Vasco da Gama’s Estádio São Januário  and then at Estádio Olímpico João Havelange – Rio Mayor Eduardo Paes has promised to fund a major rebuilding programme at Estádio Moça Bonita if it is chosen to stage rugby, at a cost of some $34 million, with capacity for 15,000.  A location for the field hockey arena was still being negotiated with the sport’s international federation. The land where the golf course will be constructed remains in legal limbo – an issue of ownership involving companies Elmway, and an Italian developer, Mauro Pasquale.

Moreover, the ousted presidents of the local badminton and ice sports federation have asked the IOC to probe court interference and accused the Brazilian Olympic Committee of not complying with the Olympic Charter.
Rio 2016’s accommodation plans were presented during the meeting. The Commission recognised that a lot of work has been done but underlined that many hotel constructions were still to be confirmed in the next few months; the final accommodation plan is an essential building block for many Games operations.

Rio 2016 also presented its plans for engaging the whole country through different areas, such as education, culture, digital media, the brand, and spectator experience.

The IOC's next visit to the 2016 Olympic sites will be in June.