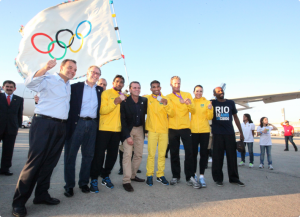 Following the London Games: They have four years of hard work till their Olympic Games Opening Ceremony.  Surely the handover in London, with the Olympic flag passing from Boris Johnson to Eduardo Paes, was a very muted prelude.  The Rio organising committee had over 150 personnel in London, observing. Casa Brazil at Somerset House promoted investment into and business with Brazil.  The main cultural exhibition at Casa Brasil was called ‘From the Margin to the Edge: Brazilian Art and Design in the 21st. Century’. There was also ‘Brazil, the time is now!’ (Brasil, a hora é essa!) portraying travel destinations, gastronomy, nature and culture. ‘Passion and Transformation:  A Unique Experience through Sport’ (Paixão e Transformação: Uma Experiência Única através do Esporte) featured the history of Rio 2016: the victory of Rio’s candidature, its vision and its plans for staging the Games.

In Brazil, much is going on and much is to be done for the Olympics, let alone for the Confederations Cup in 2013 and Football World Cup in 2014. Have a read of “Brazil is Calling” on the New Millennium website, published 24 August 2012.  Brazilian sponsors built limited campaigns around the London Games, which according to some reports did not get the expected media and wider following.  Bradesco, the official bank of Rio 2016, used Brazilian athletes. Their main competitor, Itaú, is a sponsor of the World Cup and is already using football strongly. Sadia, a Brazilian food brand, sponsors some Brazilian Olympic federations (judo, swimming and gymnastics) and created video promotions that mixed sports with fantasy and videogames.

Brazil won three gold medals as in Beijing 2008, along with five silvers and nine bronzes, a total of 17, two more than in Beijing. The women´s volleyball team, already national heroes, won their second gold medal in a row. But the other two gold medals were surprising, creating new Brazilian sports icons: Sarah Menezes in judo and Arthur Zanetti in gymnastics. The biggest disappointment was Brazil’s silver in football, losing to Mexico. One commentator said ‘Silver tasted like iron’.  Equally, Brazil did not perform well in swimming, sailing, equestrianism, athletics, and beach volleyball – and the government announced $700m of investment in elite sport over the next 4 years with the ambition of achieving a top 10 place in Rio.

Olympic construction: Construction giant Odebrecht is engaged on a vast number of World Cup and Olympics projects as well as infrastructure and urban developments such as the giant and exciting Porto Maravilha redevelopment. Benedicto Barbosa da Silva Junior, the CEO for Odebrecht’s Brazil infrastructure unit recently expressed more concern about [preparations for] the World Cup than about the Olympics.    “This is a new experience,” Junior said. “Previously in Brazil, (companies) would have started the project and said, ‘OK, later we’ll see what it costs.’ Today, the government wants to have some security that the numbers will come in within a margin of error that’s acceptable for everybody, so we don’t repeat the Pan American experience.”

“It shows maturity,” he said, estimating that fewer than 10 percent of Olympic-related projects are still waiting for the government to award contracts for construction.

I’m not sure how easily that translates into timeliness of construction. Three venues being built were recently designated as Confederations Cup venues, putting their completion under pressure. The new Sao Paulo stadium for 2014 is still to be fully financed. In several of the 12 World Cup cities, related infrastructure is behind schedule. The renovation of Rio’s famed Maracanã stadium, which hosted the final of the 1950 World Cup, has also been complicated. “We should have demolished it and then started from zero, just like (the British) did with Wembley,” Junior said.

The Rio Municipal Government has announced delays to several new venues that are to be built, eventually, on the site that was previously the Nelson Piquet motor racing circuit in the Baha Olympic Park area.  It seems the delays are due to issues relating to ownership of the land, which has been a matter for contention for some time. It may be that the issues are in fact wider – bringing into consideration the ultimate use of the land and venues and so the design and construction plans – and so, more complex.  These are the sort of matters that Carlos Nuzman will need to resolve very soon so that normal business, which is complex anyway, can resume.  Meantime, the organising committee has appointed a new marketing director, after two resignations (departures…!?) from the position earlier this year.

New Millennium Business is able to lead and support your entry into Brazil, with particular access to important events organisers,  governing bodies as well as to invaluable business and commercial players. Get in touch to discuss your ideas!