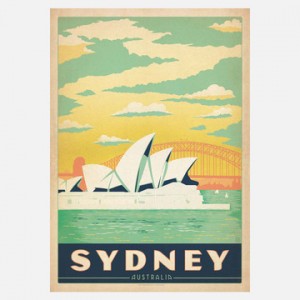 How to brand a city is, it seems, a debate that has no real conclusion. For the times, attitudes, economic environments, nature of competition, as well as those driving the process are constantly changing. Certainly, branding in that sense is much about the character of the ‘owners’ of the time as well as the product, could we say the ‘property’, being marketed.  As an example maybe, the current machinations in philosophy, policy and implementation of Australia’s frontline ‘illegal immigration’, is being covered by media globally and undoubtedly recasting this country in a new light. Maybe the impact will be short term only, maybe not. However, it adds a dimension to the complexity of global perceptions and of what makes Australia attractive, contemporary, compassionate, etc – or not.

City branding is able to be more definitive and purposeful and less socio-political.  Sydney has many unique qualities and values and I suspect is often seen as separate, to while part of, Australia. We all look at many things around us with degrees of ‘schizophrenia’.

Tourism and the convergence into tourism of our substantial events industry is vital to Sydney – as it is to the State and to other cities in Australia. Naturally, one major dimension of city branding is the impact short term, but moreso medium and longer term, on tourist numbers and the depth of their visit – related directly to the nature and of their experience, pleasures and memories and the engagements we are able to provide them. Just recently in NSW, it was noted that there are more than 96,500 businesses involved in the tourism industry supporting more than a quarter of a million job…that’s one in every 22 jobs! Wow. And indeed, that value driver is replicated around Australia.

I love to see how real time business and people adopt ‘Sydney’.

► Bank of Sydney, formerly known as Beirut Hellenic Bank was launched on 6 May 2013 by chairman Nicholas Pappas, with the appointment of Julie Elliott as CEO – offering “a new brand, new product offering and new direction.”

► Vivid Sydney, such a stunning and widespan event, is poised for even greater ideas, presentations and forms of engagement. The 2013 edition generated new record crowd numbers, global media coverage in more than 150 countries, and tens of millions of dollars in new business. There were more than 60 light art installations by artists from all over the world and around 100 industry and sector-focused events, complemented by Vivid LIVE and Vivid Ideas Exchange.

► And in so many areas, while times are tough, a lot of creative companies are firing up:

R/GA is looking for a planning director, Destination NSW has advertised three senior positions; M&C Saatchi wants a client director- brand strategy; Millward Brown is looking for a director; Minter Ellison has an events role going; AFC Asian Cup Australia 2015 is after a project manager, major events; dmg events wants a head a of content; Movember is after a business and community engagement person; NIDA is looking for a head of communications…

► On a different and lighter note…only perhaps relevant in that the name arises…did you see the coverage in the US about Sydney Leathers, the 23-year-old former sexting partner of Anthony Weiner, running to be mayor of New York?