The following excellent articles were published by The Guardian newspaper.

We believe the subject covered and the considered implications are very important for those involved in the major events and indeed in all events and creative businesses.

The two articles are reproduced in full with authorship and credits shown.

Row over Olympic cauldron design settled out of court

Exclusive: Locog acknowledge work of design firm Atopia, but Thomas Heatherwick remains adamant the design for the Olympic cauldron was his own

• Why the Olympic settlement is a milestone for designers 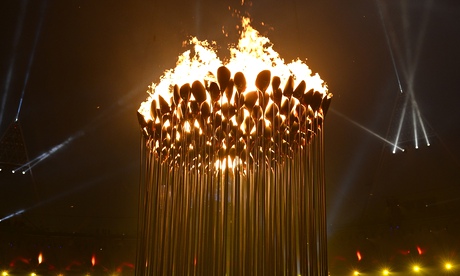 The Olympic cauldron was the centrepiece of the opening ceremony of the London 2012 Games. Photograph: Leon Neal/AFP/Getty Images

Organisers of the London Olympics have reached an out-of-court settlement over the disputed origins of the cauldron design that formed the centrepiece of its opening ceremony.

The startling cauldron of copper petals that rose up to form a flaming flower at the climax of the ceremony had been hailed as one of the most original in the history of the Games, and another triumph for the highly regarded British designer Thomas Heatherwick. But two years on, Locog has acknowledged in a statement that New York-based practice Atopia came up with five design principles that would go on to become defining characteristics of the cauldron.

The acknowledgement, which comes with an undisclosed financial settlement, follows a year of legal wrangling since the Guardian revealed striking similarities between the cauldron and a design for a pavilion developed by Atopia. Their proposal was pitched to Locog between 2006 and 2008, several years before Heatherwick was involved, when the practice was engaged in a consulting and tender process for a project to showcase sustainability values during the Games, called the One Planet Pavilion. Five concepts from Atopia's strategic sustainability framework, including an "acorn and oak" tree-planting programme and "beyond zero" principles, later used by Olympic contractors, have also been acknowledged.

"We are very relieved that Locog has decided to settle with us and publicly acknowledge the work we produced," said David Turnbull, the British architect who runs Atopia with his partner Jane Harrison. "We knew it would be time-consuming and painful, but we felt it was important to go through the process – and we're pleased that our tag-line 'anticipate the future' has been borne out." 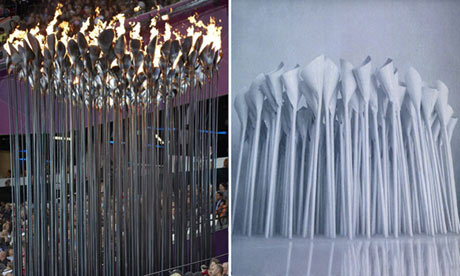 In a settlement that states no admission of liability, Locog acknowledged that Atopia came up with several key features, including the real-time construction of a pavilion from more than 200 flower-shaped forms, one for each participating nation; the fact these elements would be brought in by "bearers" and passed on to the "next generation" to be planted to form the pavilion; and that the flower-shaped forms be returned to participating nations after the Games. All of these were evident in the cauldron's final form, which has now been enshrined in a purpose-built gallery at the Museum of London that opens to the public tomorrow. The cauldron's narrative is showcased in the museum display, where a cluster of scorched stalks stand in a quasi-religious shrine, but Heatherwick remains adamant his design was not influenced.

"I knew nothing of this settlement until today," he told the Guardian, "and it has no implication for any of the creative team. As we've said before, the design process was categorically our own, from start to finish. I can't help but feel saddened by what seems like cynical timing to coincide with the opening of the Museum of London's cauldron exhibition this week."

The exhibition displays patinated test petals alongside the original cauldron mechanism, but there is no sign of the design development of the cauldron, as all drawings were shredded for reasons of secrecy, according to the museum's curators.

Danny Boyle, creative director of the opening ceremony, expressed equal surprise at news of the settlement. "We tried to acknowledge all inspirations and contributions, great and small," he said. "And whilst it's inevitable some were innocently overlooked, I can assure everyone, the public, Atopia, Locog's liquidators, judges, lawyers, that at no point did any of the creative team involved in creating the opening ceremony see or hear about Atopia's work."

While details of the settlement cannot be disclosed, lawyers have speculated that legal action took the form of breach of confidence proceedings, rather than copyright infringement, with Locog's liquidators keen to tie up loose ends to avoid the case going to court.

"There are too many bits of coincidence here," said Sir Robin Jacob, professor of intellectual property at UCL and former court of appeal judge, who in 1987 successfully defended the composer Vangelis against claims of copying the Chariots of Fire theme tune, and presided over a judgment in favour of architect Rem Koolhaas against a student's plagiarism claims in 2001.

"Breach of confidence is founded on the basic law of conscience," he said. "If you're told a secret that you know is a secret, then you shouldn't use it for any other purpose. If the recipient of a confidential bid passes it on, then the bidder has every right to get quite cross about it."

Following the settlement, Atopia will be making a donation to its non-profit subsidiary to support development work in Africa.

Cauldron controversy: why the Olympic settlement is a milestone for designers

• Exclusive: row over Olympic cauldron design settled out of court

News that the Olympic organising committee, Locog, has settled with design team Atopia comes after a year of top-secret meetings. It followed the Guardian's reports of similarities between Thomas Heatherwick's cauldron and Atopia's pavilion design, which the latter developed at Locog's invitation between 2006 and 2008.

The settlement binds Atopia with a gagging clause, so little is known about the legal proceedings. But we do know the settlement acknowledges that the practice developed five key concepts, all of which featured in the final cauldron design.

The settlement marks an important step in the murky world of intellectual property (IP) and confidentiality in the process of tendering for design work, which all too often leaves designers with little recourse for legal action when their ideas are taken up without credit.

“This is a very unusual set of circumstances,” says trademark lawyer Robert Cumming, senior associate at Appleyard Lees in Leeds. “These things never usually come to light – either because of non-disclosure agreements, or because the offended party doesn't have the resources [for legal action], or they can't build a strong case. So there's not a lot of case law out there.” The protection of ideas alone, he adds, is usually not covered by IP rights, which instead protect the specific expression or embodiment of an idea. And even then, the case would rest on proof of derivation, based on original sketches and drawings. (In the case of the Olympic cauldron, most sketches have been shredded on the grounds of secrecy in the run-up to London 2012.)

“It's very hard to prove when ideas have been assimilated,” says Alastair Cotton, a partner at the London legal firm Kerman & Co who specialises in major sporting events and has represented other Olympic committees in the past. “This series of events is highly unusual. There have probably only been three reported cases that are vaguely similar to this in the last 50 years.”

Cotton mentions the landmark case of Seager v Copydex in 1967, when an idea for a carpet-grip design that was discussed in confidence during a meeting with a manufacturer was later produced without the designer's knowledge. The court held that the company was in breach of confidence, but had acted honestly, ruling that it was a case of “subconscious copying”.

Then there's the unsuccessful 1996 claim in De Maudsley v Palumbo over the idea for the Ministry of Sound nightclub. The claimant argued that the defendant, who ran the club, had appropriated his ideas for a new type of dance club after the claimant mentioned them at a dinner party. The case rested on five supposedly novel features of the new space, including that it would be very large and fitted out in hi-tech industrial warehouse style, and employ top-quality disc jockeys. The judge, unsurprisingly, countered that that the ideas were “individually too vague” and could not be protected by law, adding that disclosing the idea at a social event did not suggest an obligation of confidence.

Further cases are mostly to be found in the television industry, where there have been various claims that TV formats have been copied from confidential pitches. They date back to 1983, with the successful case of Fraser v Thames TV about the origins of the concept for what became the series Rock Follies. More recently, such attempts have been met with less success. In this year's case of Wade v Sky, the claimant had submitted a proposal for a music talent show, called The Real Deal, to the defendant. The defendant rejected the pitch, but went on to make a show entitled Must Be the Music, which shared some features of the original pitch. None of these were deemed individually original, nor, the judge ruled, did it seem likely they had been derived from the claimant's pitch.

So how does the case of the Olympic cauldron weigh up in this context? "If you read the statement issued by Locog's liquidators, you would hardly know what they were on about,” says Robin Jacob, professor of intellectual property at University College London and former court of appeal judge. “It is carefully worded not to admit any liability, as is always the case with out-of-court settlements.”

Jacob has a long career of defending and presiding over such cases, having successfully defended the composer Vangelis against claims that he copied the Chariots of Fire theme tune in 1987. Four years later, he presided over the case of a gap-year student who had sued architect Rem Koolhaas over accusations that the design of the Rotterdam Kunsthal was based on his final-year student project. “It was an outrageous case,” says Jacob, who judged in Koolhaas's favour. “The building looked nothing like the student's design. It was a complete delusion, just pure fantasy.” The cauldron case, Jacob says, is “shrouded in mystery”.

Atopia, for their part, says it was invited to present its proposal to a small committee in the early stages of Locog's formation for London 2012, comprising director Bill Morris, head of new media Alex Balfour, head of sustainability David Stubbs and design principal Kevin Owens. Atopia says the head of ceremonies, Martin Green, who went on to brief Danny Boyle and Thomas Heatherwick, was copied in and briefed following the meeting, but did not attend the presentation. (Heatherwick says he only learned of the settlement today and adds: "As we’ve said before, the design process was categorically our own, from start to finish.")

Green is adamant their work did not influence the following design development. “Neither work by Atopia or anyone else played any part in the briefing I gave to Danny Boyle and Thomas Heatherwick at the beginning of the process to create the Olympic and Paralympic Cauldron,” he says. “The design for the cauldron came about solely from the creative conversations between Danny, Thomas and myself. Danny and Thomas have far too much integrity and talent to require using other people’s ideas in this way.”

As part of a statement issued by Locog, the London 2012 organising committee recognised the contribution of Atopia. The design firm's Jane Harrison and David Turnbull have outlined the five concepts for a design scenario that it had submitted:

1. The live-time construction of the pavilion in the opening ceremony for the Games.

2. The pavilion being made from 200-plus flower-shaped forms, one for each of the participating nations.

3. The flower-shaped forms being brought into the opening ceremony by "bearers" from each participating nations team.

4. As part of the ceremony, the bearers passed each flower-shaped form to the "next generation" to be "planted" and "deployed" as a pavilion.

5. After the Games the flower-shaped forms should be returned to the participating nations.