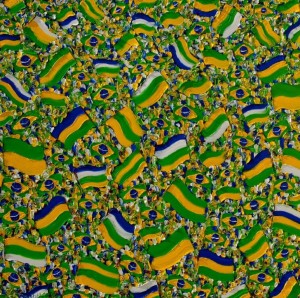 ‘In Brazil, soccer is not just a game, it’s a national drama. One of Brazil’s great 20th-century playwrights and novelists, Nelson Rodrigues, recognized that the sport trumped even his own craft in defining the nation. “Abroad, when you want to learn about a people, you examine their fiction,” he wrote. “In Brazil, football plays the role of fiction.”

Arrive very early, don’t bring valuables, and sit on the edges of the grandstand, not in the middle of the mayhem. Fans have complained that some of the newer stadiums are too civilized and seats too expensive, but their loss is your gain.’

Meanwhile, James Young writes in The Independent about the rather tainted complexion of Brazilian football, football wallowing in the mire of corruption, suggesting that “it often appears as though chaos has become the norm.” He focuses on the CBF President Jose Maria Marin  as well as his predecessor, Ricardo Teixeira.

“The new World Cup stadiums are starting to open, and look impressive, which perhaps gives a misleading sheen to the state of the footballing nation (even if many are late and running hopelessly over budget). Further down the food chain, things are not so rosy. Rio’s Engenhão ground was recently condemned as structurally unsound and closed by the city council, despite opening a mere six years ago.  This means that the city, arguably Brazilian football’s spiritual home, is currently without a top flight football stadium.” The article is at  http://blogs.independent.co.uk/2013/04/11/zero-dark-thirteen-brazilian-football-wallows-in-the-mire-of-corruption/