News The 34th America’s Cup – right at the edge

The 34th America’s Cup – right at the edge

The America’s Cup is a glamour event. The accident this week in San Francisco with Swedish contender Artemis Racing operating at high performance under extreme conditions, with the loss of one of their talented crew, brings the event into focus well before the Louis Vuitton races and the 34th Cup itself. Australia and New Zealand have strong connections and history with the race although of the two only New Zealand is a contender.

There are mountains of details about the emergence of the competition for 2013.  The rules have been written and re-written over recent years. Technology has been installed as major defining characteristic, with much design input from Larry Ellison's Oracle team and some would say promoted by Dennis Conner as a means to further securing the Cup for the US. Certainly this has moved from a rich man’s sporting competition to an absurdly wealthy-cum-corporate funded game. One driver for taking the new yachts to the edge of design technology was to create a markedly stronger spectacle and so raise the Cup’s profile, following and indeed TV broadcast revenues. 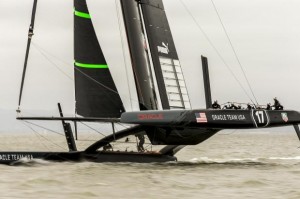 In essence, the yachts now specified are fibre-glass catamarans, with winged hulls and vitally important hydrofoils that enable the yachts to lift totally out of the water and reach competition sailing speeds of 40 miles per hour and more. These are large ‘grand prix’ yachts, labelled AC72’s – with 40 metre-high carbon fibre masts.  A precursor yacht also being used for other races, the AC45, was being used for a couple of years in competition while the AC72 was defined – or rather the rules were fully created – and the first editions of the AC72 were built last year. The AC45 is powered by a wing that towers over 20 metres above the deck. The crew of the AC72 is crouched into small cockpit like boltholes along with essential gear they need to operate.

The construction of these yachts is extremely complex. The refining of design features within the rules is a crucial part of the competition outcome.  The yachts are very costly, around $10m each, and there appear to be just three locations with the mix of nautical design and construction skills, the US, Spain and New Zealand. The costs and difficulties associated with construction have led to just 4 main contenders rather than the 10-14 that was mooted. These teams are Artemis Racing of Sweden, Oracle of the US, Luna Rossa of Italy and Emirates Team New Zealand. The Italian and New Zealand vessels are built in Auckland NZ. Artemis’ carbon fibre wings are made by Future Fibres at Valencia, Spain. Oracle is US-built.

For those of you with a sense of yachting, here are the primary specs for the AC72: 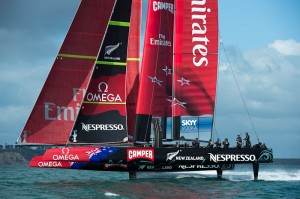 Southern Spars Custom Projects, Cookson Boat Builders and NZ Core Builders Composites in New Zealand manufactured wing sails and masts for Emirates Team New Zealand and Italy’s Luna Rossa.  Conventional carbon masts and rigging supporting high-tech sails have been replaced by 40m wing sails for the 2013 AC72 class yachts. The AC72 is a massive leap for designers, boatbuilders and sailing team. More than 50,000 design hours have gone into the project as designers and engineers pushed the boundaries in design and technology. They have designed more than 500 parts to be manufactured locally in aluminium, titanium and composites. Seven Auckland machine shops have engineered the metal components. Only deck gear and winches could be bought off the shelf. Nothing like it has been built previously in New Zealand. Yacht composite components have been built at Cookson Boats at Glenfield, Southern Spars at Avondale, and three other boatbuilding companies. About 40,000 hours have gone into the build.

Pete Melvin is considered one of the world’s leading designers of racing multihulls. He’s also a multiple class world and national champion. His company Morrelli & Melvin has designed competition catamarans for years and helped write the AC72 class rules. In 2008 Pete began working with Oracle Racing as a sailing coach before moving into design analysis. He has designed for Emirates Team New Zealand. Canadian Steve Killing works with Emirates Team New Zealand with responsibilities including hull development and fairing, heat-shrink wing skin research, wing tab geometry and articulation, and aft crossbeam fairing. This gives an idea of the tech complexities involved.

San Francisco has struggled during the recession of the recent years to allocate the earlier promised funding to host the Cup. Some $30m has been promised and corporate support is still being sought. There are a number of reports suggesting major benefits to the city…

Piers 27-29 have been redeveloped for the America’s Cup and will also host super yacht berthing – big business.  The media centre and other support functions will be housed in Piers 19 and 23.

The Cup excitement is yet to come. Emirates Team New Zealand was the first team to launch an AC72 and the first to fly with both hulls clear of the water lifted by hydrofoils. They have just one vessel in San Francisco, constrained by costs. Oracle and the others have two a piece.