News SCG gets ready for MLB…baseball

SCG gets ready for MLB…baseball

Sydney will be the focus for the upcoming Opening Series of Major League Baseball – likely to be one of several must-see sporting spectacles in 2014. The event has been featured on the L A Times website – which attracts more than 22 million unique visitors a month. This world-class event will see sporting icons the LA Dodgers and the Arizona Diamondbacks descend on Sydney for six days, to play two opening series games at the Sydney Cricket Ground on 22 and 23 March.

The Los Angeles Times said: “Think of this as the ultimate road trip. The Dodgers open the Major League Baseball season with two games against arch-rival Arizona on March 22 and 23 on Sydney's historic cricket grounds renovated to accommodate baseball. If you've always wanted to see splendid Sydney or can't wait to get back, here's one of the most exciting chances in years.” 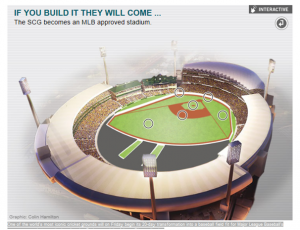 The Sydney Cricket Ground, an iconic cricket ground, has commenced its 20-day transformation into a baseball field fit for the Major League Baseball's season opener. The SCG will receive one of the biggest makeovers in its long history. The overhaul is extensive – including locker room makeovers, temporary seating and surface replacement – but perhaps the biggest challenge has been sourcing the clay that makes up the pitcher's mound and infield.

Six months of experimentation went into trying to mix a blend of clay and synthetic material that complies with MLB standards. However the best efforts of three Australian specialists couldn't produce the right blend, forcing tour promoters Moore Sports to import clay from the United States. Moore Sports chief executive Jason Moore said that it was just not possible to reach MLB standards due to the different soils available in Australia. To add to the complexity…and costs no doubt… to adhere to Australia's strict quarantine guidelines, the clay, sourced from San Diego, had to be extracted from five metres below the surface.

Channel Nine has outbid its rival TEN and Network Seven, to acquire the broadcast rights to the MLB Opening Series games between the Arizona Diamondbacks and the Los Angeles Dodgers. The deal includes free-to-air broadcast via Nine’s digital television channel, GEM. ESPN will show the Opening Series, as well as the exhibition games the Dodgers and the Diamondbacks play against the Team Australia, on pay-television in Australia, New Zealand, the Pacific Islands, South America and the Caribbean. 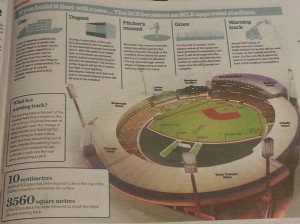 The MLB games are predicted to drive more than $13 million into the local economy and up to 80,000 travellers from around the world are expected to descend on Sydney. Hosting the event is a coup for NSW, as this is the first Major League series held in Australia and only the sixth outside the US. Nearly 70,000 tickets have sold over both days, 16,000 going to interstate and overseas fans. Prices range from $69 to $500 for platinum grade.