Brought to you here because it is a cogent piece.

Where once, sport looked west for investment and inspiration, now it looks east.

The oil-rich billionaires of the Gulf have planted a flag at the heart of the sporting landscape in recent years. They have invested their inconceivable wealth across an array of sports into all corners of the world and now they are using their influence to bring sport to the region, as a global statement of their ambition.

Dubai has one billionaire per 200,000 people

Three Gulf states are at the heart of this extraordinary revolution: Qatar, Abu Dhabi and Dubai. In Dubai alone, you will find one billionaire in every 200,000 people.

In Abu Dhabi, a rival state in the United Arab Emirates, the figures are just as extraordinary. It is in the process of building the jaw-dropping Louvre Abu Dhabi,  having paid the world-famous Paris museum more than £400m just to use the name. While in Qatar, more than 14% of households have at least £1m of private wealth in the bank.

And it is that wealth, that influence, which has lured sport to the Gulf.

Take last week, for instance. On Monday, the row over Qatar's right to stage the 2022 World Cup rumbled on. On Tuesday, Doha in Qatar won the right to host the 2019 World Athletics Championships. From Thursday to Sunday, Rory McIlroy duelled with Henrik Stenson at the European Tour's season-ending showpiece in Dubai.

Lewis Hamilton, Nico Rosberg and the rest of the Formula 1 circus were in Abu Dhabi from Thursday before contesting the final Grand Prix of the season on Sunday at the ostentatious Yas Marina Circuit, built at a cost of about £900m ($1.5bn).

The region is fast becoming a sporting hub like no other. Qatar, for example, will host world championships in boxing, swimming, squash, handball and para-athletics in the next 12 months as well as staging almost 40 other sporting events.

The question is why? Dr Christopher Davidson, reader in Middle East studies at Durham University, says the approach is all about increasing global exposure.

"One of the key reasons behind the approach is the desire to accumulate 'soft power' in states which are either major trade partners or, more importantly, potential military protectors, notably the UK, France and the United States," he told the BBC.

"If sport is a way to allow these Gulf states to grab favourable headlines and become better known, then it can help them to appear more open, more friendly."

If we look at each of the three states individually, the picture is easier to understand.

Dubai has the longest association with sport thanks to its supreme ruler, Sheikh Mohammed bin Rashid Al Maktoum. The 65-year-old is best known as owner of Godolphin, the thoroughbred horse racing group, which he founded in 1994.

In 1996, the Dubai World Cup was inaugurated as the world's richest horserace and takes place at the world's most opulent course, the Meydan, built at a cost of £800m ($1.25bn).

Sheikh Mohammed's private wealth is estimated at £9bn, but his reach extends far beyond that. He founded Emirates Airways, which last year spent 1 billion dirhams (£172.4m) on sponsoring sport.

They have shirt deals with Italy's AC Milan, French club Paris St-Germain and Arsenal, whose north London stadium will be named after the airline until at least 2028. But they also have deals with the US Open tennis, the International Cricket Council, the Ryder Cup and the USA Rugby Union team.

Kevin Hasler, general manager of PR firm BPG, Cohn & Wolfe, said: "When you watch a Premier League game and the commentator says 'here at the Etihad' or 'their third successive win at the Emirates', naming stadiums and shirt sponsorship has become enormously effective.

"Brands are being seen around the world in newspapers and on TV, day in, day out. The core of these strategies is about investing to put these states on the map, getting them talked about and discussed."

Elsewhere, Dubai has hosted an ATP Tennis event at the Aviation Club with Roger Federer, who has a home in the region, winning four times in five years from 2003 and a sixth time this year.

Abu Dhabi has, however, gone one step further. If Dubai has Emirates Airways, Abu Dhabi has Etihad – a name synonymous with the Abu Dhabi-owned Manchester City.

Who are the families behind the wealth?

The family have ruled the emirate since the 18th century and pride themselves on 'respect for heritage, culture, tradition.'

The ruling family are complex with Sheikh Mansour one of 19 sons born to Abu Dhabi's long-term ruler Sheikh Zayed bin Sultan Al Nahyan. His mother, one of six wives, had six sons, making her part of this vast family the most influential.

In terms of wealth? It is almost limitless. It is estimated that the family have as much as $1tn in overseas assets alone. Their investment in City represents loose change, in relative terms, even if they have pumped in excess of £1bn into the club since 2008.

Their football interests extend elsewhere, however. A company owned by Sheikh Mansour has recently agreed to fund the redevelopment of Real Madrid's iconic Santiago Bernabeu stadium  to the tune of £312m.

The work will include the creation of a hotel and shopping centre. But perhaps it is their move to expand into the United States that is more interesting.

In 2013, Major League Soccer and the iconic New York Yankees announced a pioneering deal to create an MLS franchise in New York in time for the start of the 2015-16 season – New York City FC was born.

It is a development that could give Abu Dhabi a footing and profile in the United States that was previously unimaginable. A few months later, it was announced Sheikh Mansour and Manchester City added Australian side Melbourne Heart.

"You could look at things like the Abu Dhabi Grand Prix, the Abu Dhabi golf championships and the investment in Manchester City as some of their most prominent global marketing assets," said Ben Faber, senior director at Fast Track Middle East, the company tasked with delivering City's fan loyalty programmes.

"The Manchester City investment has given the emirate global awareness through the fan base and they have been able to tap into associated Abu Dhabi businesses such as Etihad to leverage off the back of that ownership as sponsors of the club."

And what of Qatar? Financial experts describe it as the world's most ambitious deal hunter. A brief scan across the London skyline would suggest they have a point.

The Shard, Europe's tallest building,  is Qatari owned, as are swathes of the Canary Wharf financial district.

During the financial crisis, the Qatar Investment Authority (QIA) emerged as a white-knight investor to become Barclays' biggest shareholder. A little further east, many of the buildings in the Olympic Village are now owned by QIA.

The world's most expensive block of flats, Number One Hyde Park,  is Qatar owned as is Harrods, the famous department store. It owns a fifth of the London stock exchange, 20% of Camden market. The reach is extraordinary.

Qatar is ruled by a 34-year-old Emir Sheikh Tamim bin Hamad Al Thani, the world's youngest reigning monarch. Born in Doha, the capital of Qatar, he was educated at Harrow School in London, before graduating from the Royal Military Academy Sandhurst. He is now head of the QIA, which is estimated to have assets of £300bn. 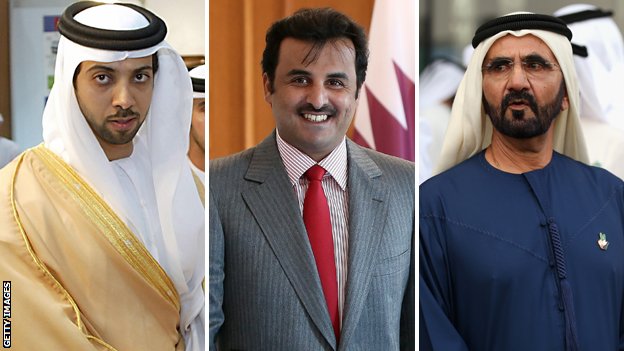 Questions remain about the bidding process for the 2022 World Cup and world governing body Fifa has yet to fully address the plight of the 1.4m migrant workers in the country, many of whom are there against their will.

Far more to Qatar than the 2022 World Cup

The project began just after the turn of the century, when some of Europe's elder footballing statesmen were lured to Qatar for one last pay day. Pep Guardiola was among them, playing for Al Ahli between 2003 and 2005.

The Bayern Munich manager subsequently became an ambassador for Qatar's successful World Cup bid. But there was more to come. Some 10 days after Fifa announced the country would host the World Cup in 2022, came the news that Qatar would appear on the Barcelona shirt, in a deal that would become the biggest in football sponsorship history.

The deal was struck with the Qatar Foundation, the country's charitable arm. Two years later, Qatar Airways' paid £76m (€96m) to extend the country's sponsorship to all areas of the club.

Then in 2011, QIA bought Paris St-Germain. It was a bold move to harness the potential of the biggest one-club city in Europe. To aid their cause PSG signed a controversial €200m-a-year sponsorship deal with the Qatar Tourism Authority. Paris is not the only city in Europe touched by the wealth of Qatar. A year earlier, Sheikh Abdullah Al-Thani, of the country's Royal Family, bought the Spanish club Malaga.

Controversy or opportunity for Qatar?

Qatar's wealth is built on having the world's third-largest natural gas reserves. But they will not last forever. "By bringing sport to the Gulf, these states are not only helping to boost tourism, boosting GDP as a result, but they are also reducing their reliance on the oil, gas or industry that may not last forever," said Dr Davidson.

And yet while the region brings opportunity and wealth it also brings with it controversy. The climate does not suit all sport at all times. The row about when to stage the 2022 World Cup is well publicised. Qatar is also moving the 2019 World Athletics Championships to the autumn because of the unbearable summer heat.

And that is to say nothing of conditions for migrant workers, who often have to surrender the passports and whose right to come and go is governed by their employer.

In September two British researchers documenting the problems faced by migrant workers were held for 10 days without charge. In Dubai, the former Leeds United managing director David Haigh has been in prison for six months without charge.

And yet these issues are being overlooked. Money talks. As does the opportunity to take sport to new parts of the world.

What about the future?

No one can be certain of the answer. Doha has twice bid for the Olympic Games but they are unlikely to be put off bidding again. Who would bet against them?

There are, however, those who believe that the region's investment focus is shifting towards cultural and artistic assets. In 2017, construction is due to be complete on a new Guggenheim Museum,  based on the original in New York.

But having secured such a stronghold in sport, their existing investments will remain a key part of each respective state's marketing strategies. The wealth is limitless, the ambition to bring the best athletes in the world to the region remains.

It is a land grab unmatched anywhere in the world. In sporting terms, east has met west.