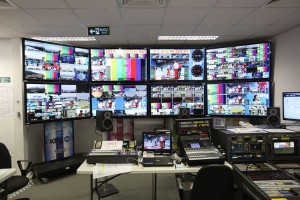 What goes on to ensure delivery of sporting events such as Olympic Games? Who brings you all those beautiful Television images from the Olympics? Well here is a peek behind the scenes of OBS… Olympic Broadcasting Services. 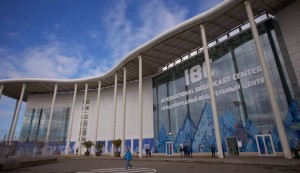 During the Sochi 2014 Olympic Winter Games, OBS used more than 450 cameras to produce over 1,300 hours of live sport, ceremonies and Olympic News Channel coverage. This coverage was distributed by more than 80 rights-holding broadcasters across the world to some 200 countries.

Olympic Broadcasting Services (OBS) is responsible for the international television production and provision of services for rights-holding broadcasters. Traditionally, OBS transmits the international signal for the Games. Yiannis Exarchos became CEO of OBS following legendary Manolo Romero’s retirement after the London Olympics in 2012. The IOC owns the global broadcast rights for the Olympic Games – including broadcasts to television, radio, mobile and internet platforms – and is therefore responsible for allocating Olympic broadcast rights to media companies throughout the world. In 2001, it established OBS which serves as the permanent host broadcaster for the Olympic Games.

For Sochi, the OBS team increased from 150 full-time employees to a workforce of approximately 3,200 by the start of the Games. Wrap this number together with other teams operating for other rights-holders and at the International and Mountain Broadcast Centres, and the number of specialist technical people involved added up to about 7,500. 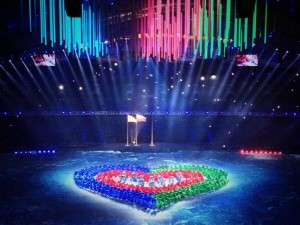 The 2014 Games in Sochi were the first winter games to have individual events broadcast in Super Hi-Vision digital format, which has 16 times the resolution of HDTV with 22.2 surround sound. The Olympic and Paralympic events were filmed using brand new spidercams, rail cams, and cameras mounted on snowmobiles. Filming was also done from helicopters and airships.

The two main broadcast centres were large. The main International Centre, the IBC, covered over 40,000 square metres and operated 24 hours a day, servicing more than 55 rights-holding broadcast organisations. The Mountain Centre was a 9,000 square metres facility providing post-production facilities in close proximity to skiing and sliding competition venues. The IBC warehouse covered 8,400 square meters, housing all broadcasting equipment. In the IBC, broadcaster offices ranged from small units with a few desks and computers to the NBC facility, which practically had its own village within the IBC for many of its 2500 staff in Sochi. NBC itself has an extensive arrangement with Sony, using their wide range of specialist equipment.

OBS offered the main News Channel for rights-holder broadcasters to produce their own programming. Additionally, the OBS Multichannel Distribution Service offered seven ready-to-air channels of live content via satellite; and Multi Clips Feeds which distributed supplementary clips from the alpine events. This provided access to unseen camera angles, primarily from high-speed cameras. During competition additional clips of each athlete from the specialty cameras were recorded during the run so that when the skier finished the run a string of additional angles were available for post-production needs.

Host Broadcast Services, HBS, is the other main sporting events broadcast production company. While OBS was ‘doing’ Sochi, HBS had started planning the 2018 FIFA World Cup to be held in Russia. HBS will operate in Brazil for the 2014 FIFA World Cup, which will itself be followed by the 2016 Rio Olympics, an OBS ‘gig’. For the 2014 World Cup, HBS will deliver every match of the tournament to viewers/listeners around the world, via TV, via their mobile devices, via the internet or on the radio.

Extracts from the IOC’s 2014 Media Guide

OBS will utilise more than 450 cameras to produce more than 1,300 hours of live coverage.

The OBS team will increase from 150 full-time employees to a workforce of around 2,500 people by the start of the Sochi 2014 Games. OBS will install 532 commentary positions and will provide a range of services to the RHBs at the competition venues, the International Broadcast

• Specialty Cams – OBS plans to utilise a number of special camera systems, some of them for the first time in the Olympic Winter Games, to capture unique and original angles of particular sports.

The host country, Russia, is set to deliver more Winter Games coverage than ever before, with over 11,700 hours of coverage across all platforms. Free-to-air channels including Channel One, Russia 1 and Russia 2 will air over 1,300 hours between them, while an additional 3,200 hours will be made

available via seven pay TV channels, including Russia HD, Sport and NTV Plus channels, and 5,700 hours will be shown through seven websites.

More than 1,300 hours of coverage is also due to be made available on mobile/tablet platforms.

In the USA, NBC Universal will present more than 1,539 hours of coverage of across NBC, NBCSN, CNBC, MSNBC, USA Network and NBCOlympics.com – the most ever offered by a US broadcaster for a Winter Games and more than the US coverage of the previous two Winter Games combined.

In Canada, free-to-air broadcasters CBC and Radio Canada Tele will air almost 700 hours of coverage, while there will be an additional 2,200 hours across pay TV.

Across Japan, a total of 538 hours will be broadcast by NHK (450 hours across General and BS1) and digital terrestrial TV channels NTV, TV Asahi, TBS, TV Tokyo and Fuji. Additional coverage will also be available online through Gorin and NHK websites and apps.

In Germany, ARD will be broadcasting 120 hours of coverage, of which 90 hours is expected to be live. There will also be an additional 100 hours on ZDF and 75 hours on Sport 1. An additional 10 online and mobile/tablet providers will also deliver Sochi 2014 coverage in Germany.

Following the success of London 2012, the BBC is set to offer British viewers its most comprehensive coverage of a Winter Games ever, with more than 200 hours of network TV coverage, as well as up to six live streams online covering every event, available on PC, tablet, mobile and connected TV.