This coverage of Etihad Airways is one of a series by  New Millennium Business, looking into the wide span of sponsorship of sports and sporting events by leading international companies. 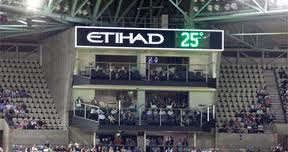 Recently, Etihad also signed a five-year extension to keep its name on Melbourne’s Etihad Stadium. The original deal is said to have been valued somewhere between $5 million and $8 million per year.

In North America, Etihad Airways has agreed a multi-year partnership with Major League Soccer, the top division of football there.

- Etihad Airways has been Manchester City Football Club’s main club partner since May, 2009

- the Club’s stadium has been renamed as the Etihad Stadium, forming the centre piece of a newly-named Etihad Campus, which encompasses a large part of the Sport City site in East Manchester, the popular City Square entertainment space and additional existing and planned facilities

- a Manchester City FC liveried aircraft, which was named ‘Blue Moon Rising’, is used to fly the team for their tours

- Manchester City banked record £400 million sponsorship deal with Etihad Airways. This includes a 10-year extension to their shirt sponsorship at City, as well as financial backing for the Etihad Campus

The stadium is currently undergoing extension works that are expected to cost in the region of £50 million and will be undertaken in two phases. The project will result in an increased capacity of 60,000 (up from the current 48,000), making it the second largest in the English Premier League, behind Old Trafford (capacity 75,811), home to local rivals Manchester United FC. The first phase of construction will be completed in time for the 2015-16 season and will see the South Stand expanded by approx 6,000 seats.The project design is by Populous.

- provision of club flights to AFC Champions League fixtures around the region as well as promotions for club management, players and supporters

- Opened in 2000, 5,000 capacity stadium features a fully retractable roof and hosts over 100 sporting, concert, and cultural events every year

- five-year extension to its naming rights deal for the multi-purpose Stadium; the deal could well be worth 50% more than the previous deal which was estimated between AUS$5 million and AUS$8 million per year

- Major sponsor of the Sport Australia Hall of Fame

- In 2012, Etihad announced a multi-million Euro five year extension of their strategic partnership to encompass sponsorship of the All Ireland Senior Hurling Championship and becoming the naming rights sponsor to the spectacular new Skyline landmark tourist attraction atop Croke Park.

- Supports the Nation’s Triathlon through flight provision for athletes and other promotional activities, as well as forging a partnership between the Nations Triathlon in Washington D.C. and the Tri Yas Triathlon in Abu Dhabi