The battle for the TV broadcast rights to sports in Australia remains hot – maybe they're all infused with the wealth effect of the rise in property prices…or perhaps it is the other way around.

Just look how powerful and important sporting events are to television broadcasters… and why they pay so much for access and broadcast rights. And in turn, why those rights payments are so important to the various sports codes who have been ‘rolling’ in it. 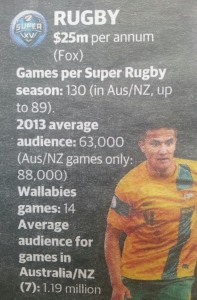 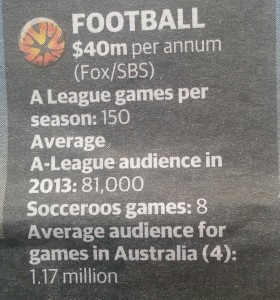 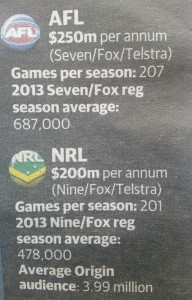 This is all happening as the IOC seeks to lock in future Olympics contracts and is hoping to snatch up to a cool $250 million for 2 or 3 series of Olympic Games. The networks are all eager but reluctant at the price. Sochi went to Channel TEN after its rivals decided to back off bidding. There is no doubt the package over some years will be an important sports cornerstone…for whoever secures the deal.

And very soon the rubber will hit the road on negotiations for the rights to rugby. The last deal of $25 million per year with Fox Sports and SBS, over five years, is likley to be eclipsed…and the ARU is said to be looking for $40 million per year. This figure is 'plucked' since it happens to be the amount secured recently by the FFA for soccer. Is this a valid benchmark or comparator?

TEN pushed its way into key sports in the first part of 2014, under new management. Now Network TEN has recorded its worst weekly audience share for prime time on record. The free-to-air television network had a 13.8% share of total audience from 6pm to midnight in the last week recording week of March, placing it fourth behind the ABC, which had a 17.9% share. Seven Network won the week with a 33% audience share, while Nine Network was second with a 31% share.

After enjoying ratings success with the Big Bash League cricket competition, the Sochi Winter Olympics and the Australian Grand Prix, TEN needed to get audience traction with its general entertainment programming. Seven and Nine have the single most-watched programs among capital city viewers. The top 10 programs for the week were dominated by Nine’s The Block and Seven's My Kitchen Rules. Ten recorded just 5.9% audience share on its primary channel on Sunday evening, although the network's One was the most-watched multi-channel of the night.