This coverage of Allianz, global insurer, is one of a series by  New Millennium Business, looking into the wide span of sponsorship of sports and sporting events by leading international companies.

The company, headquartered in Germany, insures some 50 million cars globally. It places much emphasis on its risk and commercial insurance business. 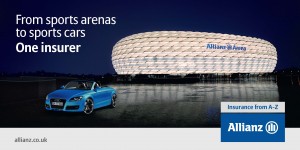 Its consumer+business focus is cleverly brought together in this advert.

Allianz is focused on naming rights deals in Australia, France and the United Kingdom

- a 43,000-seat mixed-use stadium under construction in São Paulo, Brazil

- fourth naming rights deal over the past two years

- signed a partnership agreement with Saracens Rugby Club including rights to name their entirely refurbished stadium in London "Allianz Park."

- multi-year agreement with the SCG Trust

Flagship naming rights deal in 2005 with the Allianz Arena in Munich, Germany 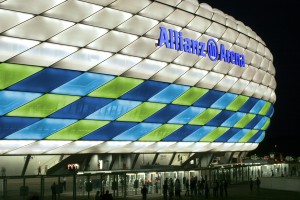 - deal extends the naming rights for the club's Munich stadium, completed in 2005, until 2041

Allianz is a platinum partner of FC Bayern München.

Allianz's deal includes a sponsorship contract until 2023 and Bayern's stadium, the Allianz Arena, will keep it's name until at least 2031.

Multinational financial services company Allianz agreed, in April 2014, a five-year deal to become the first title sponsor of the German Women’s Bundesliga club football competition. The deal will run from 2014-15 to 2018-19. The competition will now be known as the Allianz Women’s Bundesliga in what is the first naming rights agreement for a German Football Association event.

Title sponsor Allianz Championship PGA Tour stop, Boca Raton, Florida. In the US, the company sponsors golfers Tom Lehman of the PGA and Champions Tour and John Harris of the Champions Tour.

Creator and organiser of the popular junior golfing initiative, Lucky 33

Allianz supports the Women’s British Open (2013), held at St Andrews Links, the Solheim Cup 2015, the most prestigious women’s golf event in the world, and the 2013 Solheim Cup winner, Beatriz Recari.

Sponsor of the Ladies Slovak Open.

Formula One – Allianz has had an association with F1 for many years, and has been an Official Global Partner of Formula One since 2007. Formula One sponsoring remains Allianz’s strongest platform for highlighting the importance of risk management and road safety. Focus of the partnership shifts further towards safety issues with the unprecedented branding of the Formula One Safety Car by Allianz.

Mercedes AMG Petronas – Allianz is associated with the Mercedes GP Petronas Formula OneTM team, which boasts seven-time World Champion Michael Schumacher and Nico Rosberg as its drivers. The Mercedes and Allianz brands are aligned on race tracks worldwide through the Allianz branding of the Official Formula One Safety Car and Medical Cars, provided by Mercedes-Benz.

- Allianz will serve as the official insurer of Colombian soccer until 2014.

Sponsor of the FINA 2013 World Championships in Barcelona

Allianz is targeting €350 million (US$457.3 million) in South American policy sales for Allianz Global Corporate & Specialty by 2015, half of which would come from Brazil, where the company recently said it expects corporate and project underwriting to grow by 12 per cent this year.