Andrew Demetriou announced this (Monday) morning that he will stand down as chief executive of the Australian Football League, the top Aussie rules competition, at the end of the 2014 season. Demetriou replaced Wayne Jackson as AFL CEO in 2003 after previous roles as AFL Players Association boss and football operations manager. Since then the league's annual revenue has expanded from $170.9 million to $446.5 million, the sport enjoys a billion-dollar TV rights deal and has overseen multi-billion dollar expenditure on new stadia. The competition has expanded to 18 teams with the inclusion of Gold Coast and Greater Western Sydney in traditional rugby league heartlands.

At 52, Demetriou will resurface someplace. His tenure has been marked with serious management issues, some would say lapses, in particular relating to the drugs-‘supplements’ debacle…and there are those who feel AFL could have progressed much more. Demetriou seems to have done well personally…with an annual salary around $2 million which reportedly grew to $3.8 million over the last year.

The AFL will announce a $15 million profit this week from record revenue of about $440 million for 2013. This includes a $310 million operating surplus. Club members are at 750,000. It is expected the AFL would look closely at broadcasting its own matches in the next broadcast rights deal after 2016, saying the AFL Media already had the capacity to do so. Looking at the issue of ‘equalisation’ between clubs, in an interview with John Stensholt at the AFR, Demetriou confirmed the AFL was working on two models whereby wealthier clubs would be taxed on football department revenue and also overall profits. A deal may not necessarily be announced this week. “The two models we are looking at includes one that is a luxury tax on a soft cap [on football department spending] and a second one is a very small tax rate on net revenue or gross or profit. But nothing has been finalised and we are not there yet.” Sounds like a small state Premier, huh? 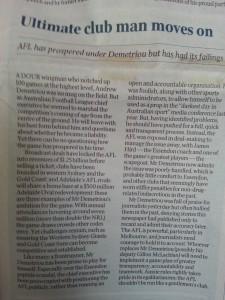 Even the fiercest critics of the AFL chief have agreed that Demetriou's ability to work with politicians and gain funding for stadium deals around the country was stunning.  Depending on the person's dealings with Demetriou, the AFL boss was described variously as a very caring person, a champion of multiculturalism, a leader of Australian sport, a benevolent dictator or an administrator whose worst work was horrific, according to AAP/SBS.

Meantime, Demetriou has been at the centre of negotiations with Japanese automotive giant Toyota, to  agree a two-year extension with the AFL to remain as the premier partner of the Australian rules football league until 2016. Toyota has served as the naming sponsor of the AFL Premiership for the past 11 years. Toyota is the only such premier sponsor, sitting immediately above major partners Coca-Cola, Carlton and banking group NAB.

The editorial shown here appeared in The Australian, Tuesday 4 March 2014.