And why Del Piero is one of them 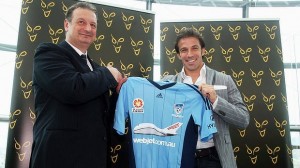 If you take a look back over the last few years, the sports and sporting events business in Australia has come up with some magnificent occasions and new ideas. Most new ideas have originated in the private sector. Government support has often been instrumental in getting the growth and major visibility – and public engagement. Here are some key developments that I think have been real game changers.

Kennett helped Melbourne become our sporting capital along with a cohort of private sector and public sector people. He injected much-needed energy to the Major Events Corp, supported the development of the Melbourne Sports and Aquatic Centre, initiated major Docklands, including a new stadium, and transport plans, was instrumental in Melbourne securing the Formula 1 GP and in its bidding for the Commonwealth Games. Kennett set the scene for Melbourne for 20 years!

The 2000 Olympics established the most professional and progressive knowledge base for planning and presenting major events we’ve seen. It resulted in a trickle through – or rather a  “flood through”, to local events capability, quality and standards that remain today.

In the first Rugby World Cup co-hosted by Australia, the semifinals were held at the 20,000 capacity Concord Oval. By 2003 the denouement was at the 83,000 seat Olympic stadium and the average across the 48 matches was 38,000. The tournament lifted the RWC event and the game of rugby union into prominence and gave the other Aussie codes a scare.

This event re-wrote the way Commonwealth Games can be delivered, albeit that subsequent cities have not had the resources and installed infrastructure to follow that lead. It also led to the  pumping of new knowledge and a new band of major event specialists into the international circuits and calendars.

The leap in rights fees – AFL and the National Rugby League have both cleared $1 billion for new deals in the past 18 months – increased TV programming and raised viewing. It also brought avenues of new funding into the respective codes to the direct benefit of clubs. It ultimately helps attract new young players, engage with schools and build true fan participation.

6. The Australian Open Tennis and the F1 Grand Prix

These are a couple of annual world class sporting events that have become the cutting edge performers of their international circuits with the direct attendance and scale only limited by our local demographics. They are adding substantially to their following via new tech/social media.

Perhaps one game-changer that really did not help was the Australian bid for the World Cup. It was unhelpful because at a time of questioning in government of whether and how money should be further channelled into promoting major sporting events in Australia, the way in which the football bid was prepared and delivered ultimately pushed the issue of policy on events into serious recess and did no favours for Australia’s top class reputation in the business.

Oops, yes that was in New Zealand. This is not to take an ounce of credit from NZ for a truly outstanding tournament, but with a major events drought of sorts in Australia, a lot of Aussies contributed to the RWC2011 and that has been a boost for us.  Similarly, there have been many Australian and New Zealand specialists and event /venues/ technology managers engaged at the London 2012 Olympic and Paralympic Games, delivering great value, and bringing it all back home.

The success of the Australian athletes at Olympics, Commonwealth Games and specific international sporting events has undoubtedly been a boon for many sports, at least in the high performance/elite athlete spheres (look at the funds channelled, selectively, via the Australian Institute of Sport/Australian Sports Commission and the various state sorts institutes). I think we have seen a breakthrough in terms of public engagement for Paralympic and para-sports and Special Olympics. These guys still struggle for funds and sponsorship but what performances!

10. The signing of Alessandro Del Piero by Sydney FC

Now comes the signing of Italy’s Alessandro Del Piero to play in the A-League. There have been lots of media superlatives. Is it a master-stroke?  Could be. What is already clear is that the ‘calculations’ that this signing would give the club and the game a major lift are already proving true. I have no doubt this move will stimulate a couple more such high profile signings, be a major boost to sponsors who will undoubtedly be keen to ride this wave of new visibility and popularity and very much change the broadcast and new tech distribution negotiating parameters of Sydney FC and of football. This could be the catalyst for a really amazing boost to football’s uplift in schools and becoming in the fullest sense one of the two major codes of football in this country. The opportunity of creating an important positioning in the international football world, engaging much more with international competition, players and communities and using the Asian Football Cup in 2015 as a vital world emergence driver all add to the excitement. Del Piero is contracted for two years, apparently costing $4 million – essentially paid by Sydney FC owner David Traktovenko, a Russian businessman based in St Petersburg.

David Hill, in his Tom Brock lecture on prospects in Australia for rugby league, noted that according to Business Review Weekly all of the AFL clubs are wealthier than all of the NRL clubs – except for the Brisbane Broncos, which just pips the poorest of the AFL teams. He raises the question of whether Australia can sustain four professional football codes. It is a question that rapidly takes the discussion to viability of clubs. Notwithstanding the direct support given by State governments who also see their poker machines revenue stream as vital (no mixed interests here, huh?)

Craig Foster really does understand the way football operates and has written lucidly, as always on the Del Piero deal.