News “GENIUS IS 1% INSPIRATION AND 99% PERSPIRATION”

“GENIUS IS 1% INSPIRATION AND 99% PERSPIRATION” 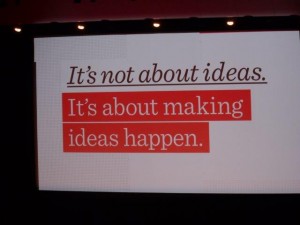 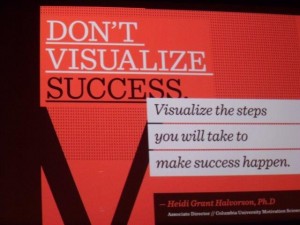 I just participated in the 99U conference that was held at the Alice Tully Hall, Lincoln Center in New York. The conference theme was translating creative ideas into action and how to make ideas happen. Presenters were loaded with examples of using new technology to get to market, to brand effectively and to be relevant. This is in the current environment of intense venture capital activity, lots of tech start-ups, high entrepreneurial start-up rates, with incubators and collaborative co-locations sprouting up.

The economic background is one of change in the economy, significant shifts in population and income in the US and renewed positiveness with cities such as Detroit seriously decimated yet resurging with new ideas and new technology businesses. New York City is strongly promoting new tech and digital businesses, actively supporting new creatives while financial support is in evidence, being provided by wealthy individuals, universities and governments. There is also a flurry of new university focus on creative thinking and innovation such by, for example, Parsons School of Design, Columbia University, Wharton as well as several universities in California.

There is a diversity of people and skills with a strong movement among the tech businesses to encourage skilled immigration to the United States. This is generating an enormous strength of innovation. 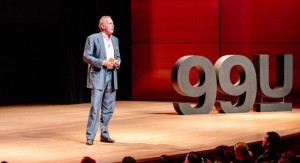 Brené Brown spoke marvellously about vulnerability, a topic on which she has spoken at TED…"You’re going to get your ass kicked – guaranteed, but without vulnerability and the ability to put yourself out there, you can’t create". The willingness to show up changes us. It makes us a little braver each time.One prevalent theme was the need to be persistent, unrelenting and put in a lot of effort. Long term persistence brings superior performance.

Ideas and execution can best be implemented simultaneously. What matters is what you do and when you get going. Passion grows with skill. As does leadership confidence and creativity. Several speakers spoke about the creative process, story boards and the psychology of language…and the need for trust. The magic is in the process.

Another was the normality and acceptance of and dealing with failures as a stage of the process. We too easily attribute success or failure to 'what we are'. We are remarkably bad at describing why we are successful or not … and often wrong about why we fail.

So what does this have to do with events? Well, just about everything – the future health and success of the events industry lies in recognising and understanding new and emerging ideas, expectations and behaviours and leading a new genre of events innovation that is in sync with market changes. This is true for all types of events. We need to focus on engagement and loyalty and valuable new sources of direction.

Let's have chat about implementing some new ideas?